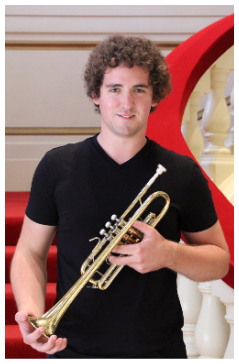 Brass Instructor
​
​     Born and raised in Alton, Illinois, Charles' interest in music began at the age of seven when he attended a local band's performance in which his father played trumpet. After most of the musicians and audience members exited the auditorium, Charles' father took him and his mother to his seat on stage. It was then that Charles decided he wanted to play trumpet like his father.

After two years of studying privately, Charles joined the Alton Youth Symphony, which sparked his continuing interest in orchestral music. It was in this symphony that he performed one of his most memorable performances: Gustav Holst's The Planets. Throughout high school, Charles was the principal trumpet player in the school's orchestra. During his final semester of high school, Charles composed and conducted an original composition, performed by the school's wind symphony.

Charles is forever grateful to his former private teacher, Byron Sutton, who helped him mature as a musician for nearly ten years. He is also grateful to Dr. John Korak for his insight and knowledge of music and the art of trumpet playing. Other mentors include Mr. Marvin Battle and Ms. Jennifer King, whom were his cooperating teachers for student teaching. Finally, Charles is thankful to his mother and father, who have encouraged him from the start of his musical career.

Charles teaches private trumpet lessons and is a trumpet coach at Webster University's CMS Band Camp in St. Louis, MO.
​
This is Charles' fifth season with the Marching Eagles and he is extremely excited to be working with the students again this year.

Alex Hornsey is a percussionist of the Civic Memorial High School class of 2019. He started his interest in music at the age of three on piano and added percussion to his repertoire through Bethalto’s band program starting in fifth grade. Ever since, he has loved band and music in general. This shows in Alex pushing his musicianship as far as it can go. He enjoys learning ragtime style piano and has attended multiple honor bands as a percussionist throughout his high school career. During his senior year, Alex served as the percussion student leader for the Civic Memorial High School Marching Eagles along with principal player both his senior year and part of his sophomore year.

Outside of band, Alex enjoys dedicating time to his home church, Cornerstone Church, spending time with friends, and working a job at Schnuck's. He plans to attend Southern Illinois University Edwardsville to pursue a music education degree in the fall of 2019.

This will be Alex’s second season as a staff member for the Marching Eagles and he is anticipating a wonderful season full of magnificent memories to follow the first season's memories!
Powered by